The Mandalay Hill is situated to the north-east corner of the Mandalay Royal Palace. It lies from north to south, its altitude being 236.5m above sea level and its height going up to 167.64m. 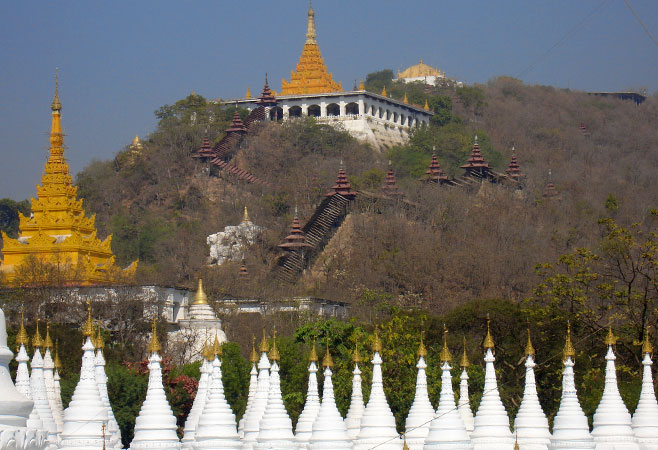 One famous Buddha Image on the Mandalay Hill is the Image of Standing Lord Buddha at the top of the hill where Lord Buddha made a prophesy. It was built by king Mindon. Eight years after the king’s death, the image was damaged by fire, and a new image was restored. The image of standing Lord Buddha is 8.22m high. 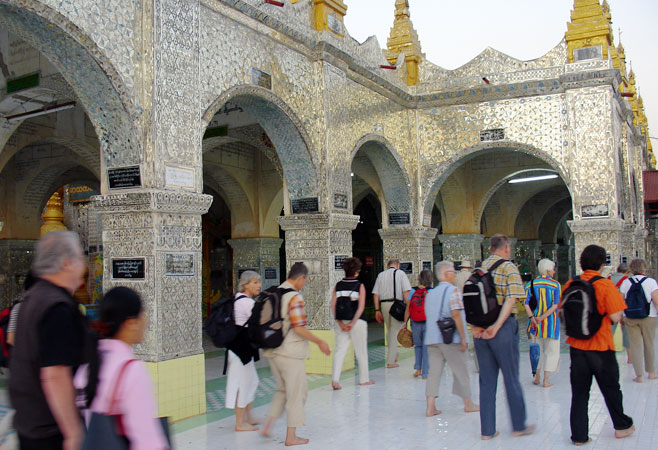 Tourists on top of the Mandalay Hill

There are two one-way bus roads up to the top of the Mandalay Hill, one to the west of the Great Lions statues winding up the way and the other at the southern passageway going down.

There are four stairways going up the Mandalay Hill, two on the north and on the west, and two on the south.

The southern covered passage with the Two Great Lions on Haungches is the most frequently used by pilgrims. There exists the Museum of the Hermit U Khanti at the head of the passageway, which was built in honour of the benevolent hermit who first pioneered to develop the plans of building religious edifices and memorials on the Mandalay Hill. Near the archway ascending the southern passage is located the Shrine of the Guardian Spirit, known as Mandalay Bo Gyi, where the natives of Mandalay often come and make offerings. The iron statues of the two snakes are well known to the visitors of Mandalay. An elevator and an escalator are also in service for going up the hill. 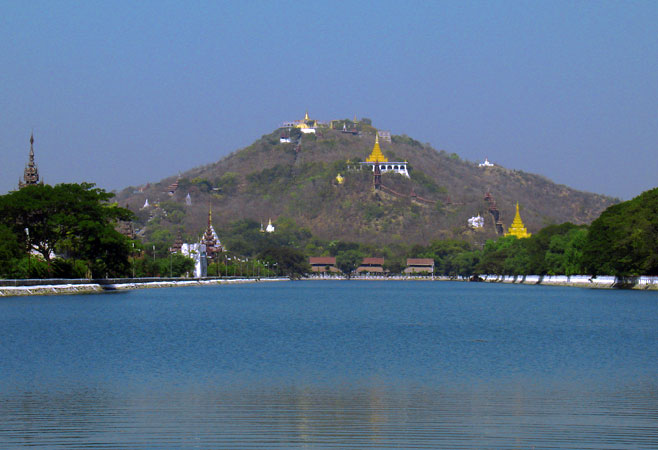 Mandalay Hill from the east moat

Like a Tower given by nature, the Mandalay Hill offers a panoramic view over the Golden City of Mandalay. One can take a sweeping view towards the Yan Kin Hill, not far from it, the Sagaing hill and the Min Wun Ranges and the glimmering Ayeyawaddy and the Shan Yoma ranges at a far distance.

It will be a memorable experience for the visitor of Mandalay to enjoy the sunset beauty over the blinking, winding Ayeyawaddy and the blue Sagaing Hill and the Min Wun ranges.