The Sanda Muni Buddha Image is situated to the east of the Kyauktaw Gyi Pagoda. It was cast by King Bodawpaya before the founding of the city Mandalay. During the time of building the Great Mingun Pagoda, during King Bodawpaya’s temporary reign in Nan Taw Kyun ( “the Royal Palace Island” ), the image was cast out of 18563.94kg of iron in M.E 1164, and was carried reverently to the Royal City of Amarapura. 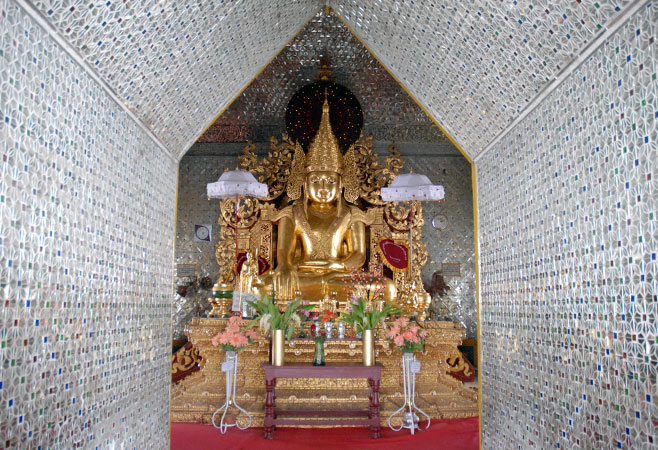 In M.E 1229, the temporary palace apartments were destroyed and the bodies of the Grown Prince and his sons Prince Malum, Prince Saku and Prince Pyinsi, who were killed during the Myin Kun Uprising, were buried and entombed. At the distance ( .91m) from the tombs, the Sandarmuni Buddha Image was enshrined in a tier-roof brick building. The pagoda was called the Sandarmuni pagoda after the Image.

Stupas and Mandalay Hill in background

In M.E 1275, the Hermit U Khanti built with the donations of the people the Dhamma Ceti, 508 shrines housing the inscriptions, 1524 inscriptions recording the Pitakas of the Three Baskets, five Nikayas and commentaries on Buddhist Pali texts ( in total, 758 Dhamma Ceti shrines and 1774 inscription slabs ).