Ananda Temple. Built by Kyanzittha in 1091 A.D., it is one of the finest and most venerated temples at Bagan. Tradition says that it was built according to the plan furnished by Indian Buddhist monks, which purported to be their cave-temple in the Nandamula mountain held to be in the Himalayas. This temple symbolizes the endless wisdom (Ananta Panna) of the Buddha just as the Thatbyinnyu symbolizes the omniscience of the Tathagata. Hence the name Ananda, which changed later to Ananda, the name of Buddha’s cousin. 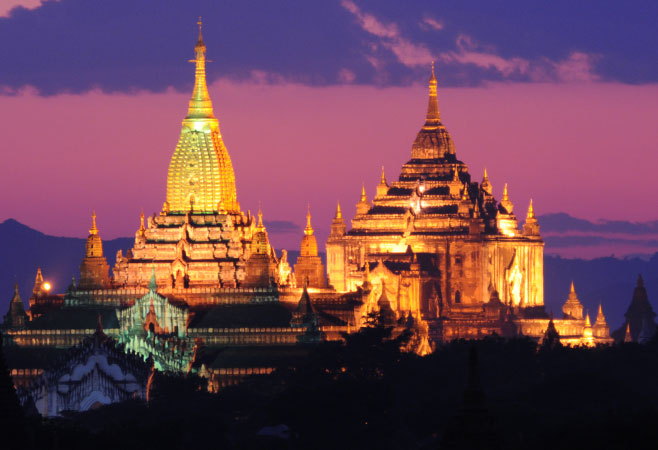 It is in plan a square of nearly 200 feet to the side and broken on each side by the projection of large gabled vestibules, which convert the plan into a perfect Greek cross. These vestibules are somewhat lower than the main mass of the building, which elevates itself to a height of 35 feet in two tiers of windows. Above this rise successively diminishing terraces, the last of which just affording breadth for the spire which crowns and completes the edifice. The lower half of this spire is in the form of a mitre-like pyramid adapted from the temples of India; the upper half is the same moulded taper pinnacle that terminates the common bell¬shaped pagodas of Bagan. 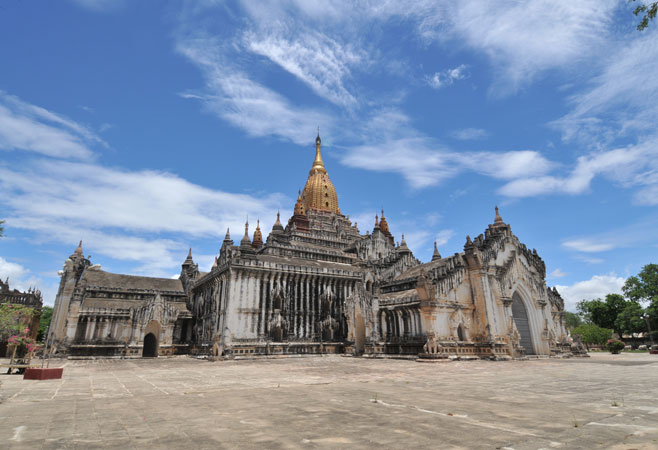 The gilded htee (umbrella) caps the whole at a height of 168 feet above the ground:
The interior consists of two vaulted and high but narrow corridors running parallel to each other along the four sides of the temple. They are connected by low and narrow passages in front of the window by which light is admitted and further intersected by four large corridors into which access is obtained through the porticoes. In the centre is an enormous cube, on the four sides of which are deep and high niches enshrining four colossal standing Buddhas of the present world who have appeared and entered Nirvana.

The images are represented in the following order: north-Kakusanda; east-Konagamana; south-Kassapa; and west- Gautama. Each of them is 31 ‘feet high above the throne, which itself is nearly 8 feet in height. Of these images only those on the north and south are the original ones contemporary with the foundation of the temple ; those on the east and west were put up later to replace the original images which were destroyed by fire. 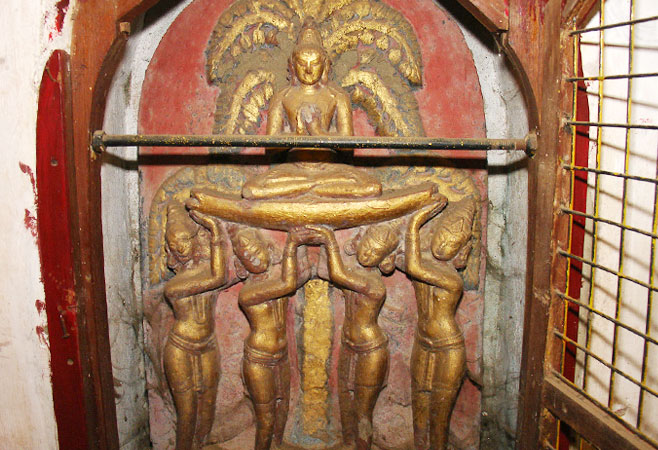 Other Interesting features of the temple are the numerous glazed terracotta tiles ornamenting the base and the receding terraces which represent the, Jataka stories and the hosts of Mara’s army. Each of these plaques is inscribed with a Mon legend. The inner walls are honey-combed with niches in which are set small stone Buddhas in various postures. The most notable among the sculptures is a series of eighty reliefs in the two lower tiers of niches in the outer corridor, illustrating the life of the Bodhisattva from his birth to the attainment of supreme wisdom.

The western sanctum also enshrines the life-size statues of its founder, Kyanzittha and the primate, Shin Arahan. In the porch on the west face there are two Buddha-pads (Buddha’s footprints) placed on a pedestal. Each footprint bears the traditional 108 marks as enumerated in some of the Pali commentaries, but owing to the gilding and wearing away due to constant washing, some of these marks have disappeared and cannot be properly identified. 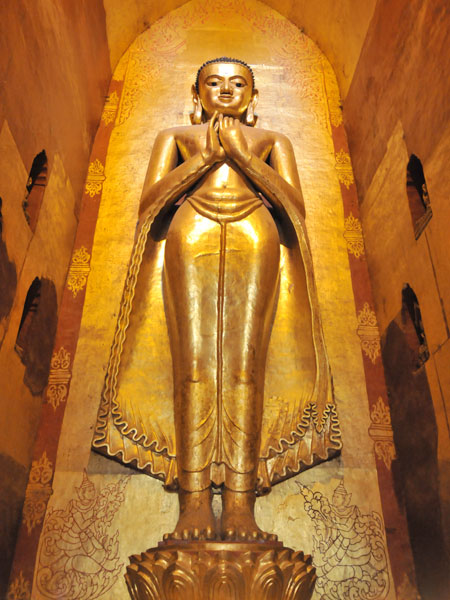 Close to the Ananda is the local museum containing exhibits illustrating the iconography, architecture and religious history of Bagan. Along the verandahs of the museum are inscribed stones collected from the vicinity. They record religious endowments of the Bagan period in different languages, viz. Myanmar, Mon, Pyu, Tamil, Siamese and Chinese.
(Source: myanmars.net)