One of Myanmar’s more revered reclining Buddhas. It is housed in a large metal-roofed shed, only a short distance, located north east of the Shwedagon Pagoda.

The Six-storeyed Pagoda surpasses the nearby Five-Storeyed Pagoda in name only as, the great image is in a reclining posture while the latter is in a sitting posture. This curious way of applying multi-storey qualifiers to places of Buddhistic worship seems to be an indigenous development which began during the second Innwa period.

Work on this image started in 1899, the donor named U Hpo Thar being fired by his ambition to make it a model edifice not only in this country but in the whole world as well. By 1907, the image of the Buddha half reclining on a royal couch on his flank, one hand propping up his upper torso was completed. From afar one might have mistaken it for an image in the seated posture.

The image then had a length of 195 feet (59.28m) and a height of 100 feet (30.4m) from the surface of the couch to the halo round the head with the height of the couch itself 5 feet 6 inches above the platform. Extensive reconstruction completed in 1973 extended the length of the image to 216 feet (65.85m) with the height of the couch however, reduced to 4 feet (1.22m). Originally the axis of the head turned towards the west and the visage faced the south, but the reconstructed image has the head aligned towards the east and the visage facing north. 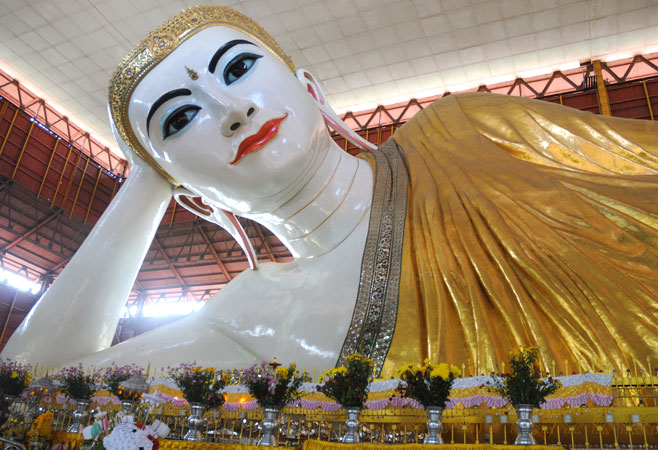 A closer view of the great reclining Buddha. 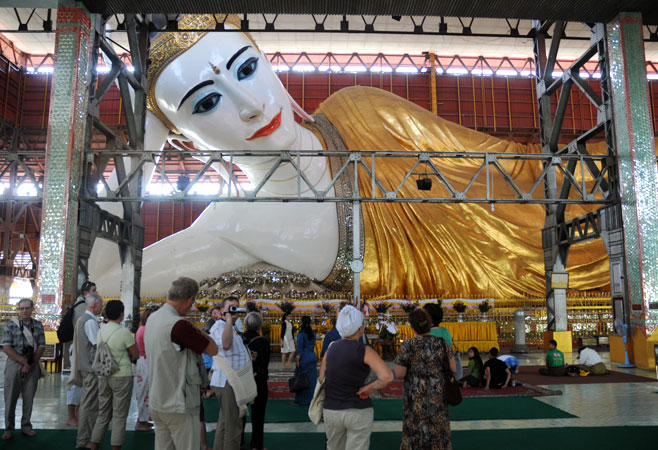 A group of tourist at Chauk Htat Gyi Buddha Image