Shwemawdaw Paya in Myanmar stands northeast of Myanmar train station. You can’t miss this Myanmar stupa, as its height of 114 m dominates Bago town. The Shwemawdaw Myanmar paya is said to be over 1000 years old and was originally build by the Mon King to the height os 23m to enshrine two hairs of Buddha. In 825 Myanmar Shwemawdaw Paya was raised to 25m and then to 27m in 840. In 982 a sacred tooth was added to the collection in 1385 another tooth was added and this Myanmar stupa was rebuilt to a towering 84m. In 1492, the year Columbus sailed the Atlantic, a wind blew over the hti (umbrella like pinnacle) Hti Roe in Burmese and new one was raised. Myanmar King Bodawpaya, in the reconstruction of Myanmar Bago after the ravages of Myanmar king Alaungpaya, rebuilt the stupa to 91m in 1796, but from that point it has had a rather chequered career. A new Hti Roe was added in 1882, but a major earthquake in 1912 brought it down. Shwemawdaw Myanmar stupa was repaired, but in 1917 major quake again brought it down and caused serious damage in Myanmar. Again it was repaired, but in 1930 the biggest earthquake of them all completely leveled Shwemawdaw stupa and for the next years only the huge earth mound of the base remained.

Reconstruction of the Myanmar Shwemawdaw Paya commenced in 1952 and was completed in 1954, when Shwemawdaw paya reaches its present height. The glittering golden top of the stupa reaches 14m higher than Shwedagon in Yangon. At the northeastern corner of the stupa, a huge section of the Hti tipped by the 1917 earthquake has been mounted into the structure of the stupa. It is a sobering reminder of the power of such Myanmar geological disturbances.

Like the Shwedagon pagoda in Yangon, Shwemawdaw Myanmar stupa is reached by a covered walkway lined with stalls some with interesting collections of antique bits and pieces. Along the sides of the walkway a collection of rather faded and dusty paintings illustrates the terrible effects of the 1930 earthquake and shows the subsequent rebuilding of this mighty stupa in Myanmar Bago. 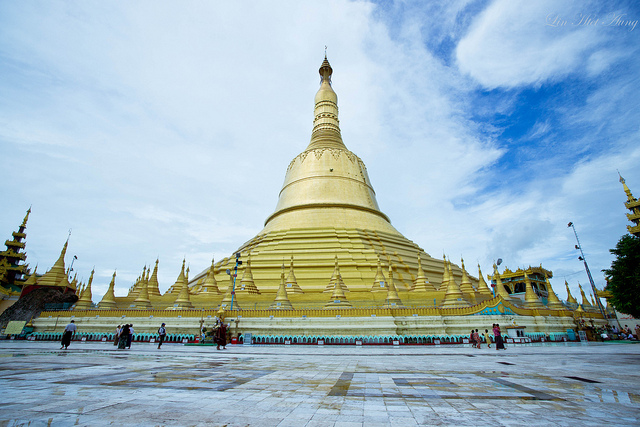