Shwebo is a city in the Sagaing Region of Myanmar, located 64 miles (103km) north-west of Mandalay on the eastern bank of the Chindwin River. Shwebo was the native town of King Alaungpaya, the founder of the Kone Baung Dynasty. Shwebo was royal capital of Myanmar from 1760-1764. King Alaungpaya fought against the rule of the Mon Monarchy in 1752, and his dynasty lasted over two centuries. He used the city as a base from which to conquer Innwa and Lower Myanmar, establishing the Third Myanmar Empire. His successor, King Hsinbyushin, moved the capital to Amarapura in the 1780s, and the city has been in decline ever since. Shwebo is also called in five different names. Moksobo, its original name Yadana-Theinhka, Konbaung, Yangyi-Aung and Shwebo, its modern name.

As with Monywa, the city is a trade center for agricultural produce, especially beans, rice and sesame from the surrounding plains between the Mu and the Ayeyarwady River. The area around Shwebo was the site of the anient Pyu city-state of Hanlin. 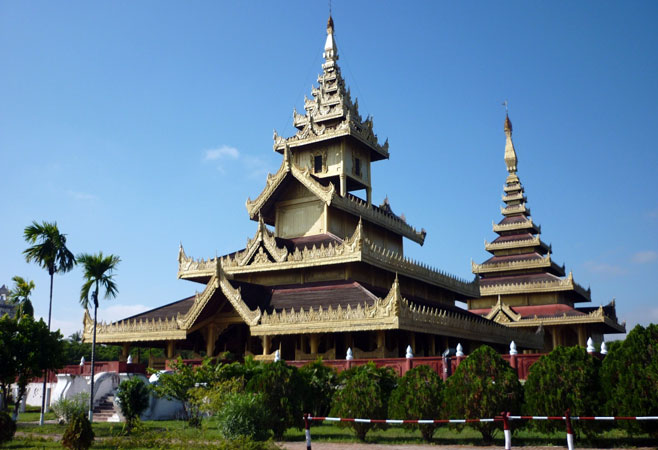 It is supposedly the spot used by King Alaungpaya as a staging point before going into battles. Even to this day people believe it to be victorious starting spot.

It was built by King Alaungpaya in 1757. When he conquered Bago, he visited to the most venerable Shwemawdaw Pagoda in lower Myanmar. Therefore he constructed the pagoda to the same architecture as Shwemawdaw. This pagoda is 30ft (9m) high and construction period took ten months only.

Shwebon Yadana Mingalar Palace is a royal palace in Shwebo, Myanmar. It was built by King Alaungphaya U Aung Zeya who was the first founder of the Konebaung dynasty, in 1753 A.D. The palace was decorated with ten kinds of Art in detail. There were totally 54 apartments and halls. The original palace was destroyed in 1766 A.D. The Department of Archaeology started to excavate at the site in 1994. The excavation revealed the hidden palace platform underneath the ground. Although the palace were destroyed, the Department of Archaeology has a good collection of ancient records and drawing of palace of parabeik. It was reconstructed in 1999.

The small town is located 29km east of Shwebo on the western bank of River Ayeyarwaddy. This place is known primarily for its production of glazed pottery, including the large Martaban Jars which were used water containers throughout rural Myanmar.

One of the significant Pyu sites is Hanlin (or Hanlingyi- Great Hanlin), which lies about 11 miles (18km) south-east of Shwebo in Upper Myanmar. It is accessible by road from Shwebo crossing the Moksogyon railway-station on the Mandalay-Shwebo line. There is a group of villages with a number of smaller Pagodas, built to the south of the old fortified city. This locality is noted for its hot saline springs.

Tagaung is situated on the east bank of the river Ayeyarwaddy, 127 miles (204km) north of Mandalay and 56 miles (90km) north of Shwebo. It’s civilization dates back to the early Christian era with Pyu culture. The ruins of the fort walls and traces of a moat are the only remnants of this ancient site.