Pindaya Myanmar, a three hour drive from Helo is a city located in the hills of the Shan State, the largest area within Myanmar. The cave is noted for its 9000 Buddha statues, but is also a bustling market town located on a small lake. Buddha images are in different sizes and materials in every imaginable corner of these mysterious caves. 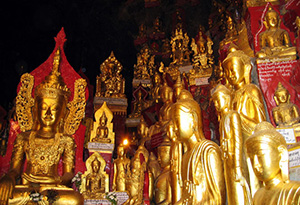 Pindaya also hides a legend, that of seven princesses, daughters of a nat-king. They were bathing in a lake at the foot of the mountain and did not notice the night was falling quickly.

When it was too dark to go home, they decided to spend the night in a nearby cave. They did not know, however, that a giant spider was living in a neighbouring cave and he thought the princesses would make a nice meal. The giant spider made a web in front of the entrance where the princesses were sleeping, so they could not get out. When the princesses woke up the next morning and they found out that they were trapped inside the cave. They started screaming. A handsome and vigilant prince heard their cry for help. The prince came to the rescue and killed the giant spider with a bow and an arrow. He thus saved the princesses from a certain death and his reward was to marry the most beautiful of the seven princesses. Today there is an image of the prince and the spider at the entrance of the cave, regarding to the legend. 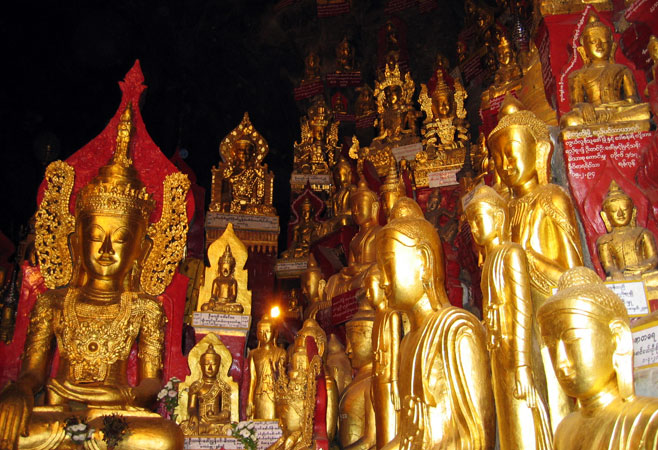 Thousands of Buddha images inside the Pindaya Cave.