Mrauk U Myanmar was once, one of the most powerful kingdom in history. The Rakhine King “Min Saw Mon” founded Mrauk U in 1433. Mrauk U was a leading trade city during its time, and abundant networks of canals allowed small and large vessels to go by. It traded with Middle East, Asia, Holland, Protugal and Spain. The Mrauk U dynasty lasted for about 352 years.

Mrauk U Myanmar was also known as “Myohaung” meaning the ancient city. In this ancient city, today, there are about 70 known and named ruined pagodas, whereas there are many more remaining unknown. 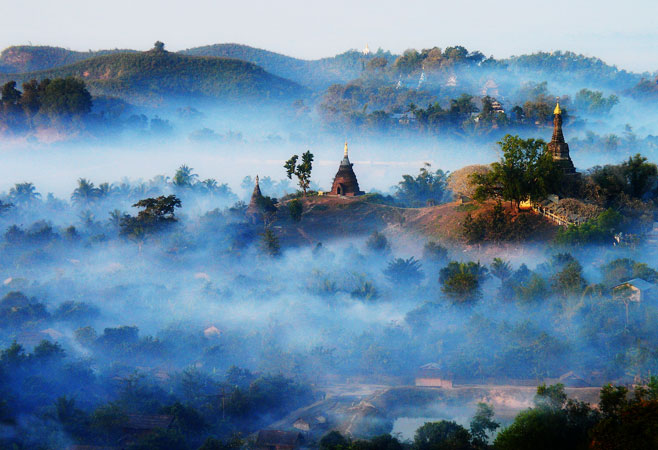 Myohaung or the Ancient City Mrauk U under the heavy fog in the morning.

Other Information About Mrauk U

Shittaung Pagoda Shittaung Pagoda - Meaning 80,000 pagoda in Myanmar. Built in 1535 by King Minbin. It has a maze like floor plan inside. Koetaung Pagoda Koetaung Pagoda - Meaning 90,000 pagoda in Myanmar. Yadanabon Pagoda Yadanabon Pagoda - The largest pagoda in this region. It was donated by King Min Khamong and Queen Shin Htwe during A.D 1612. Dukkanthein Dukkanthein - Constructed by King Minphalaung in 1571. About 100 meters north-west of Shittaung. Pitaka Taik Pitaka Taik - About 300 meters north of Dukkanthein. Built by King Minphalaung in 1591 as a repository for the Tripitaka or Buddhist Canon. Sakkyamanaung Pagoda Sakkyamanaung Pagoda - It is situated about a km north east of the old palace walls. Built by King Thirithudhamma Raza during 1629. Royal Palace Royal Palace - The ruins of the Royal Palace which was built in 1430 can still be seen. The palace had massive wooden columns which are burnt down.