Kyaikhtiyo Pagoda is located in Mon State. It is about 20kms from the town Kyaikhto. It is a 7.3 meters pagoda on top of a big “Golden Rock”. The massive golden boulder is right on top of the Kyaikhto mountain.

Kyaikhtiyo Pagoda, known as “Golden Rock,” perches on the edge of a cliff at the top of Kyaikhto mountains range, part of the Eastern Yoma. This magnificent “Golden Rock” is the most meditative and popular tourist attraction in Mon State. A small Stupa rests on top of a big boulder covered in gold leaf, which balances on the cliff thanks to a Sacred Hair of the Buddha enshrined or preserved inside the Stupa.

Kyaikhtiyo is 160 km from Yangon and is an important place of pilgrimage for all Buddhists. It can be reached either by car or by train. Devotees usually climb uphill about 13 km on foot from the base-camp. There is a well-beaten path up to the top of the mountain from the base-camp called Kinpun. However, a motor road has been built recently up to the next camp called Yathetaung (about 45-minute drive), from where it takes another 45-minute to walk up. All the tiredness along the way disappears once one reaches the top since a spectacular view awaits there, especially at sunrise or sunset. It is said that on a clear day one can see the ANDAMAN SEA glistening in the distance. 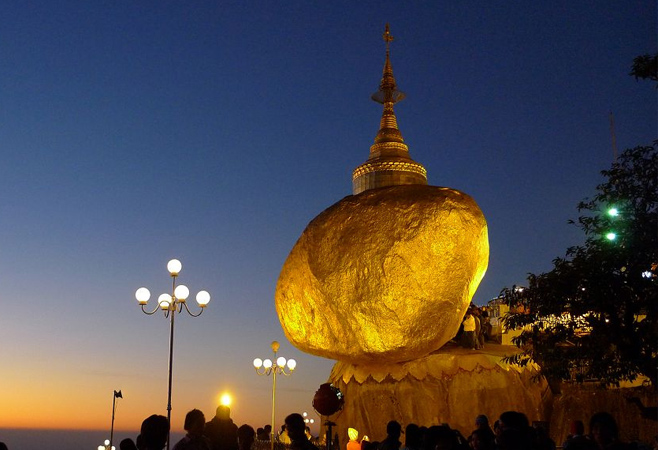 Only a few area touches the base of the large stone and the ground. 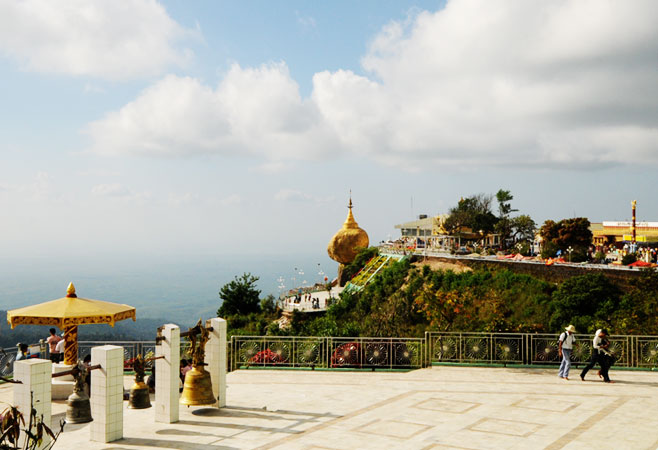 A picturesque scene of Kyaikhtiyo